When the Internet was created, it had the intention of bringing people together to share thoughts and ideas over the internet. The Internet is a place where people can learn for free and communicate with each other. But to keep illegal activities and controversial things away from the online world, Internet Censorship was created. Internet censorship is the control or limitation of what you can access (or see) on the internet. This censorship can be implemented by governments, organizations or by a person's own initiative. In this article, we are going to talk about what is internet censorship and how the thing works. So, read on to know about it more and pass the information to people who use the internet on a daily basis.

What is Internet Censorship?

Depending on the political or cultural entities, it is also seen that the general public restrict themselves from accessing certain types of content. This is mostly to avoid suspicion and gain a better social standing and it generally happens to the countries where internet censorship has been for a long time.

What Are Blocked in Censorship?

The extent of internet censorship varies from country to country. While most countries have a moderate level of censorship, other countries go far and beyond. For example, illegal activities will be censored under moderate censoring. The harsh censorships occur when it comes to censoring information such as news and communication among people by the governments. Censorship also occurs in response to events such as elections, protests and riots. Other types of censorship happen due to the use of copyrighted content, defamation, harassment and obscene material claims as a way to hide the content.

Here are the types of content that are blocked in internet censorship in some countries:

Now that you know what types of content are blocked in internet censorship, you might be thinking that this is more of surveillance than censorship. Let’s discuss the connection between censorship and surveillance.

What is the Connection Between Censorship and Surveillance?

Censorship needs a level of surveillance to be applied. It does not matter whether or not you care about one specific topic and don’t feel the need to access it. The government will still ban it from your country. Sometimes the government uses ISPs to reveal information and directly monitor the activities of the internet users they deem as suspicious.

The latest example was surveillance where the government won’t let a particular person or organization access a certain type of content. Censorship and surveillance are used by the same government parties and both of the methods serve the same purpose—to protect the country from illegal activities. Even if the government of your country is involved in internet censorship, they can also ban you from using certain sites if they find you malicious.

But again, there is a difference between censorship and content moderation. How will you know if the sites you are trying to access are not banned from your country or just removed?

What Is The Difference Between Censorship and Content Moderation?

Content moderation refers to the removal of content that may have no censorship reasons. Though censorship and content moderation appear the same in some cases, the latter is a private affair. Content moderation refers to a private decision made by the government to remove the content from the internet. The reason could be anything but mostly copyright issues, violation of law, etc. The government authorities order the individual or organization to remove the content from the internet if it violates their law.

If you don’t find some kind of content that you are looking for, maybe your government has banned the production of that content. But with the help of a good VPN, you can change your device location and access the things you are looking for. On the other hand, if the government has ordered to delete a specific thing from the internet, you won’t find it even with a VPN. You will have to go to a different website in another country that produces similar types of content.

Where Does Censorship Happen?

Censorship can take place at more than just the government level like China has banned foreign websites in their country. For example, Chinese people don’t use Facebook because that social channel is banned in their country forever. Like the same way, internet censorship can happen outside a country—at home or at an organization, your internet service provider or ISP, etc. Depending on the area of internet censorship, it can look different.

At home: Home internet censorship is mostly about parents trying to protect their children from certain types of web content. Parents use blacklists and keywords blocking techniques to ban their children from accessing rated content. Blacklists filter out websites and the blacklists are also modified and updated regularly to block different types of stuff. With the keyword blocking technique, parents hide keywords and certain pages that can’t be viewed by the kids of the house. Sometimes parents use firewalls to hide content and firewalls come in both hardware and software forms.

At work or organizations: Various organizations tend to block websites like Youtube, inappropriate content within their work premise so that the employees can spend more time working and less time streaming. They take internet censorship to increase productivity with the help of firewalls as well.

How Does the Internet Censorship Work?

Here are the ways internet censorship works in different countries:

Hackers use the DNS tampering technique to access DNS records and after getting the access, they can make changes and let themselves into the network. Tampering of Domain Name Servers can bring viruses to your system and also mean identity theft.

IP addresses are a set of numbers that identifies your computer’s unity. Every computer or device has a unique IP address. And the government perform the censorship using ad-hoc, region, geo-location or geo-blocking IP address blocking technique. It means, the devices in a particular location cannot access the websites without changing their device location.

Parents in different houses use keyword blocking techniques to block certain types of content. For example, if you want to block Donald Trump videos, you can use the keyword “Donald Trump videos” and other related keywords. If you block those keywords, you and other members of your home network won’t be able to access those content.

Some firewalls use the following information to block websites instead of using IP addresses and domain names:

Access to certain websites will be given to known IP addresses by the filter blocking software.

An  ISP blocks traffic based on the transport protocol and their port numbers individually and won’t touch the IP addresses. It will allow the ISP to block an entire application along with websites.

Internet Censorship in All Over The World 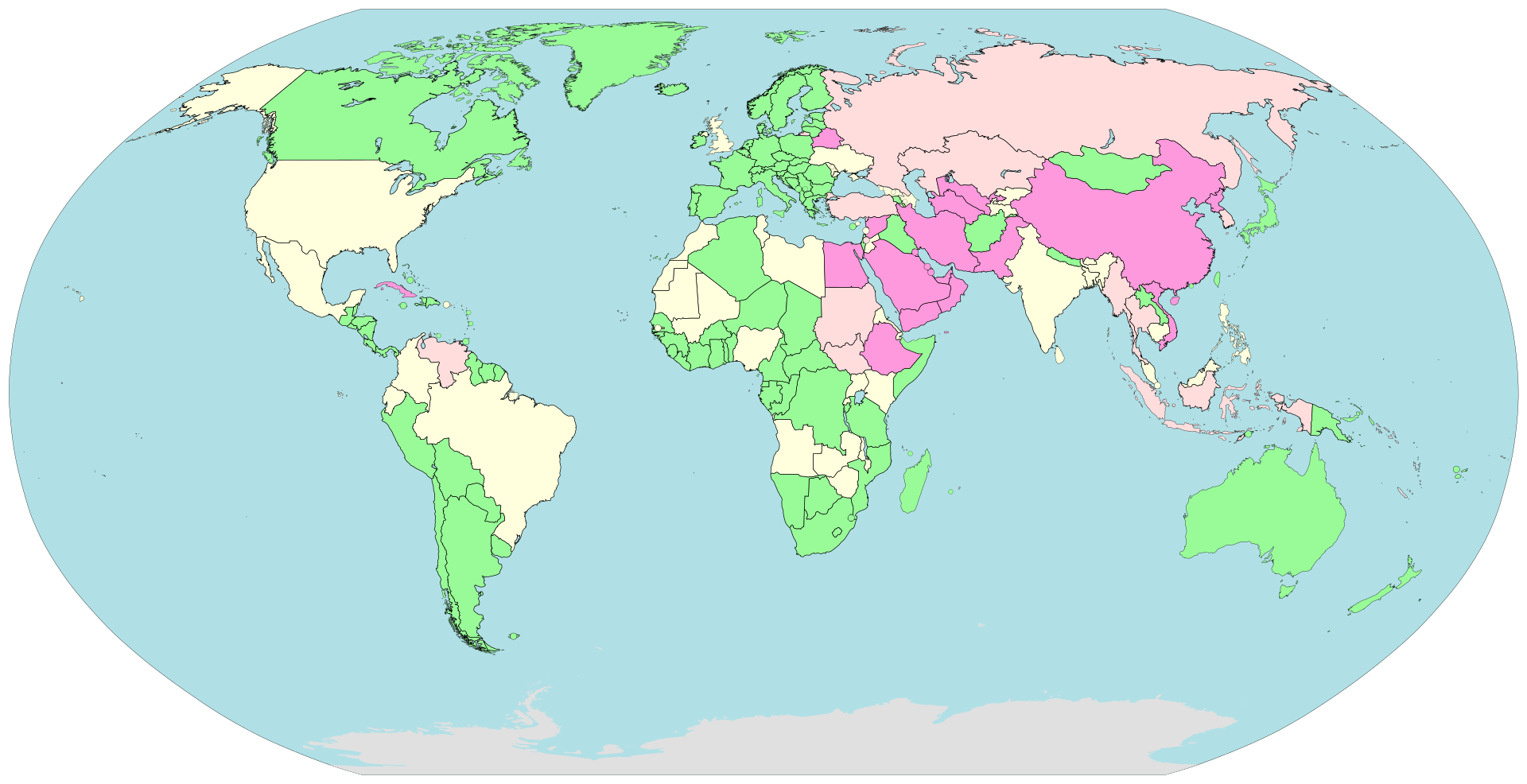 Green: Littel or none

This doesn’t mean that the rest of the countries are not facing censorship. That's hardly the truth. Now Let’s take a look at the countries that have internet restrictions:

There are many countries which had internet censorship throughout their history or might even be happening right now.

In 2006 Reporters Without Borders, a non-governmental organization that advocates freedom of press started publishing a list of ‘Enemies of the internet’. The organization classifies a country as an enemy of the internet because "all of these countries mark themselves out not just for their capacity to censor news and information online but also for their almost systematic repression of Internet users." In 2007 a second list of countries "Under Surveillance" was added.

The following list was made in June 2020 and subjected to change, reference: Wikipedia

Current enemies of the internet

Countries with Little to No Censorship

How to protect oneself from Internet Censorship?

If you are in an internet censor at home or work or trying to avoid the government’s prying eyes, here are some things you could do.

The best way to bypass internet censorship and access the blocked sites is to use a VPN from a reputable VPN provider (like VPN Surf). Using a VPN has many advantages, howhere in order to access blocked sites, this is the perfect solution. The VPN will hide your IP address and mask it with one of theirs in another country. This will not trigger the site’s geo-blocks and hence no more restrictions.

Use a Secure Browser

Secure browsers hide your IP addresses and clear out your browser cookies so that no one would know what you are doing online. As soon as you close the tabs, everything will be gone.  You will be safe even when you are visiting a restricted site because your activities are encrypted.

Try Not to Use the Incognito Mode in Browser

Even though your browser does not keep a record of whatever you are browning in incognito mode, your ISP does. And incognitos don’t come with a secret VPN like secure browsers so it’s not really a good choice. Don’t use the incognito mode if you are trying to avoid the government’s rules.

Proxy servers are similar to VPNs and they hide your IP address. You can create your own proxy server at home and use that to gain internet freedom.

Living in a country like China or Russia is a very tough thing in the internet era because they restrict most of the things there. But if you use a VPN, a proxy server, or a secure browser, you can easily avoid those strict rules at your own risk. If you want to avoid internet censorship for once and all, take a visit to the countries that don’t have these rules. Countries like the United States, India and the European Union are the luckiest when it comes to internet censorship.